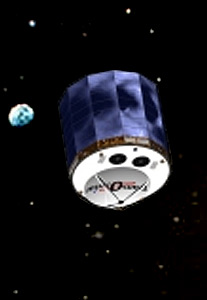 TrailBlazer 2001 was to be the first commercial lunar mission.

The TrailBlazer spacecraft was to be a multi-purpose spacecraft bus designed for missions beyond geosynchronous orbit. It is a microspacecraft, massing approximately 100 kg fueled - not including the solid-fuel Lunar Trans-Lunar Injection (TLI) Star-20 kick motor. The basic bus was to contain the following features:

For the inaugural TrailBlazer lunar imaging mission the bus was to carry the following equipment:

A mass model (TrailBlazer-2001-Dummy) was launched in 2002 to test the launch dynamics. Apparently the project did not move forward and is now unlikely to take place.