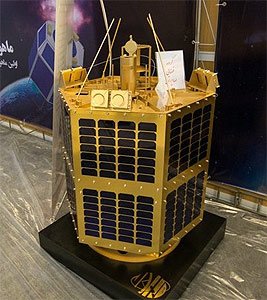 Toloo is an indigenous Iranian Earth observation satellite. It has reportedly a resolution of 50 m and a lifetime of 1.5 years.

It is the first of a new generation of reconnaissance satellites being built by Iran Electronics Industries (IEI) with SIGINT capabilities. The satellite weighing 100 kg is hexagonal in shape with a 86 cm base and a 100 cm height. Its imagery products will be used for synoptic land mapping, monitoring of water bodies and environmental disasters, agricultural areas and forests, urban distribution, and cloud coverage. Toloo is the first domestic remote sensing microsatellite planned to acquire images of the Earth with a resolution of 50 m.

Toloo was reportedly on board the failed Simorgh in 2017.

Reportedly a second copy of the satellite was built.