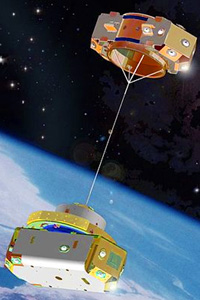 The TiPS (Tethers in Space Physics Satellite) satellite is a tether physics experiment consisting of two end masses connected by a 4 km non-conducting tether. The satellite was deployed on 20 June 1996 at an altitude of 1,022 kilometers.

This experiment is designed to increase knowledge about gravity-gradient tether dynamics and the survivability of tethers in space. TiPS consist of two end masses separated by a four kilometer tether. The End masses, named Ralph (1a) and Norton (1b), weigh 37.7 and 10.8 kilograms, respectively. The TiPS tether, made by AlliedSignal, is in two layers. The outer layer is Spectra 1000 braid for strength, the core is acrylic yarn which will puff the other braid out to the 2 millimeter diameter and give it a larger cross section to improve its resistance to debris and small micrometeoroids.

TiPS had the following instrumentation onboard:

While tethers have been theoretically studied as a means for satellite stabilization, propulsion, and electricity generation for some time, TiPS is among the first successful tether deployments in space and is the first experiment designed for long duration.