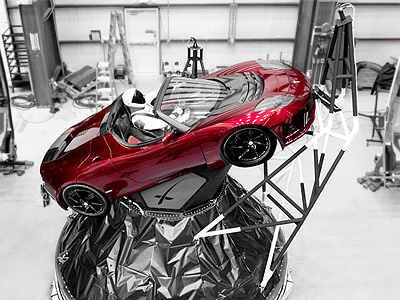 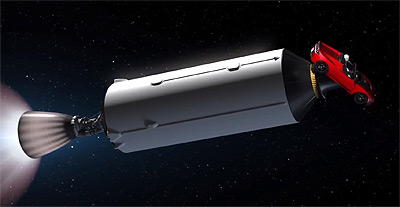 Tesla Roadster is the dummy payload for SpaceX's maiden flight of the Falcon-Heavy rocket.

Instead of a dummy mass, this flight contains Elon Musk's Tesla Roadster built in 2009 as a inert ballast and publicity stunt. The stage with the car attached is to be inserted into a deep space heliocentric orbit that will take it to the vicinity of Mars, but not into orbit around it. The car is mounted on an inclined customized adaptor and will not be separated from the stage. On the payload adapter is a plaque with the names of 6000 SpaceX employees.

A SpaceX Spacesuit called "Starman" is placed into the driver's seat. Also included is a Hotweels toy model of the Roadster with a miniature Starman inside and a storage device containing Isaac Asimov's "Foundation" novels. Reportedly the car's sound system played David Bowie's song "Space Oddity". There is also a copy of Douglas Adam's "The Hitchhiker's Guide to the Galaxy" in the glovebox, along with a towel and a sign saying "Don't Panic".

After launch on the Falcon-Heavy rocket, it orbited the earth for six hours, until a third burn of the stage two inserted the Tesla Roadster into an interplanetary solar orbit reaching out towards the asteroid belt and having a perihelion of 0.99 AU and an aphelion of ~1.7 AU. This orbit will be stable for several millions of years.