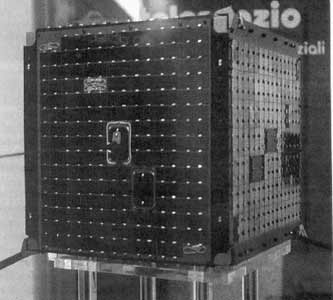 The satellite is cubic shaped by 350 × 350 × 350 mm and weighs 42 kg. It generates 65 W maximum power, and is spin stabilized employing two magnetic coils. The integration, tests and launch support was by Kayser-Threde GmbH, Munich Germany. It offers data collection and distribution for autonomous networks and environmental monitoring, and carries relaying instruments to uplink and downlink weather data from the Mediterranean and adjacent areas obtained by about 50 ground stations. It carried a Store and Forward transponder with 2 × 8.5MByte capacity.

Plans called for launch of a second satellite in mid 1995, but was never launched. This satellite was tranferred to the Technical University of Delft as Delfi 0 for educational purposes.