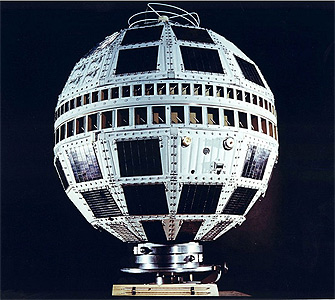 In the fall of 1960, AT&T began development of a satellite communications system called Telstar. The operational system would consist of between 50 and 120 simple active satellites in orbits about 7,000 miles high. Using large launch vehicles that were then being developed, it was envisioned that a dozen or more of these satellites could be placed in orbit in a single launching. With the satellites in random orbits, Bell Labs figured that a system of 40 satellites in polar orbits and 15 in equatorial orbits would provide service 99.9% of the time between any two points on earth. AT&T has proposed that the system contain about 25 ground stations so placed as to provide global coverage."

The cost of such a system would be high (estimated it at $500 million in 1961), but that was not a detriment from AT&T's standpoint. As a monopoly at the time, AT&T's rates were regulated. These rates included an amount that allowed AT&T to recover its costs as well as make a profit. The costs of the satellite system would be passed on to consumers just as the high costs of undersea cables were. Higher cost investments by the monopoly allow higher profits, so the complex Telstar system was attractive to AT&T.

Bell Telephone Laboratories designed and built the Telstar spacecraft with AT&T corporate funds. The first Telstars were prototypes that would prove the concepts behind the large constellation system that was being planned. NASA's contribution to the project was to launch the satellites and provide some tracking and telemetry functions, but AT&T bore all the costs of the project reimbursing NASA $6 million. Although Telstar was not really a NASA project, NASA was able to negotiate an excellent deal with AT&T because NASA held a monopoly on launch services. NASA was able to claim Telstar as a NASA supported project and even publish the report on the results of experimentation as a NASA publication, as well as getting rights to any patentable inventions arising from the experiments.

AT&T had built six flightworthy spacecraft and launched two of them using company funds. Bell Labs had developed much of the technology required for satellite communcations including transistors, solar cells, and TWT amplifiers. AT&T also built ground stations for Echo and Telstar.

While primarily communications satellites, they carried an experiment designed to measure the energetic proton and electron distribution in the Van Allen belts. Scientific information was transmitted by the spacecraft beacon, which was one of two onboard transmitters, via a PCM/FM/AM encoder. The telemetry sequence required about 1 min.

Telstar 1 operated normally from launch until November 1962, when the command channel began to behave erratically. The satellite was turned on continuously to circumvent this problem. On 23 November 1962, the command channel ceased to respond. On December 20, the satellite was successfully reactivated, and intermittent data were obtained until February 21, 1963, when the transmitter failed.

Telstar 2 was essentially identical to the Telstar 1 satellite. Telstar 2 differed from Telstar 1 by employing provisions for scientific information to be transmitted in real time via the microwave telemetry system so that telemetry could be obtained after the 2-yr timer had turned off the VHF beacon. On 16 May 1965, at 1403 UT, during the satellite's 4736 orbit, the VHF transmitter was turned off. All systems operated normally until that time.