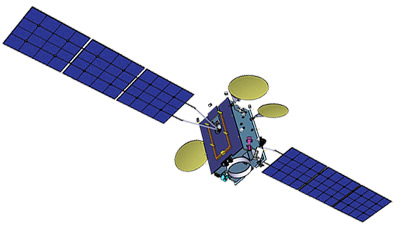 The project covered a development and in-orbit delivery of a satellite TELKOM 3, creation of augmented ground control segment, training, internship and technical support to the service operator during the satellite operation life. The satellite was built based on the new medium-class platform Ekspress-1000N. It carried 32 C-band transponders and 10 Ku-transponders or equivalent to 49 TPE. The satellite TELKOM 3 mass was 1600 kg, payload power – 5.6 kW, lifetime – 15 years.

The satellite was built for one of the major telecommunication provider of the Asia-Pacific Region - PT Telekomunikasi Indonesia Tbk. For the tender, the main competitors of the Reshetnev company were well-known companies Orbital Sciences, Thales Alenia Space and Space Systems/Loral.

Telkom 3 was stranded in an unusable orbit after launch due to an upper stage failure. A replacement, Telkom 3S was ordered in July 2014 from Thales Alenia Space.