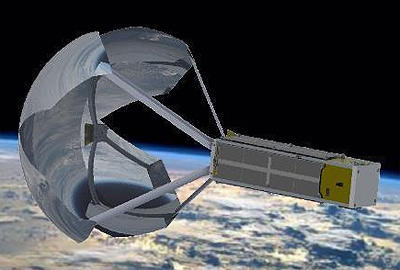 TechEdSat 6 (Technical and Educational Satellite 6) is a 3.5U CubeSat. It was built as a conjoined project between San Jose State University (SJSU) and the University of Idaho as a collaborative engineering project, with oversight from the NASA Ames Research Center.

It is a technology demonstration mission to demonstrate an Exo-Brake system to provide a targeted nanosatellite de-orbit using fully propellant-less techniques.

The basic 3.5 U design for The Development of On-Demand Sample Return Capability-Small Payload Quick Return (TechEdSat-6) differs from the TechEdSat-5 design in that a basic aluminum (T-6060) extrusion is used, but the length is adjusted to the accepted 400 mm length compatible with the NanoRacks CubeSat Deployer (NRCSD). The approximate mass is 3.60 kg. On the TechEdSat-6 front end, the direction of flight is indicated by the Teflon cap labeled front end, protects the GPS/Iridium dual-patch antennas just like in the previous TES-5 and 4 designs. This improves Global Positioning System (GPS)/Iridium reception/locking. The second Iridium (Iridium-B, associated with the level 2 functionality) remains on one of the side-mounted locations and is used during the terminal re-entry phase.

The internal design and structure remains essentially the same as TechEdSat-5 and -4. After removal of the Remove Before Flight (RBF) screw, TechEdSat-6 is loaded into the NRCSD. At that point, three Auxiliary Lateral Inhibit (ALI) switches provide the two-fault tolerant design to inhibit inadvertent power from initiating the system. Structural fasteners use at least two inhibitsat least two of three: torque specification, locking nut, or Loctite-243.

The software is also similar to the previous TechEdSat-5 design. The PWR Level 1 software has similar but more robust function such as second initiator pulses should the Exo-Brake actuators not deploy the first time. This uses the Arduino Pro-Mini (processor: Atmel Mega328P) board which controls the Iridium-A, actuators, and ultimately the upper level function. The upper level, or Nominal mode, software is almost identical to TechEdSat-5, and runs in the Intel/Edison environment. This controls the GPS and Iridium-B functionality.

As before, the pc-boards are conformal-coated and the harnesses/wires staked with the same approved materials. All testing, interface control document (ICD) and safety verification are conducted via the same procedures, and captured in the integrated TechEdSat-6 Test/Verification Document (T6P6-06-XT001) Environmental_Master Test Report.

It was selected in 2017 by NASA's CubeSat Launch Initiative (CSLI) to be launched as part of the ELaNa program. Launch took place on the ELaNa-13 mission.