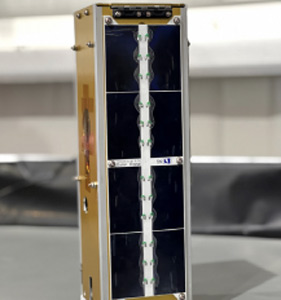 The TechEdSat 15 (TES 15) is a 3U CubeSat from NASAs Ames Research Center in Californias Silicon Valley, is a 3U CubeSat which will be used to test several technologies.

TechEdSat-15s primary experiment is a version of an exo-brake intended to survive much higher temperature environments  several hundred degrees  than in previous flights. It will demonstrate the next step forward in nanosatellites ability to target an Earth entry point. The exo-brake is a device that applies drag in Earths exosphere  the uppermost reaches of the atmosphere  to slow the speed of a satellites descent and change its direction. This experiment will permit the satellite to survive closer-to-peak heating, maintain telemetry, and assess the dynamics as the system enters the top of the atmosphere.

Another experiment on TechEdSat-15 includes the Beacon And Memory Board Interface (BAMBI), which optimizes internal and external data transfer from the nanosatellite.

The TechEdSat-NOW series has multiple research goals including using the exo-brake to de-orbit high-altitude nanosatellites at end of mission to reduce issues related to orbital debris. Additionally, drag modulation has uses for sample return from low-Earth orbit as well as tailoring orbits during aero-pass maneuvers for future planetary applications. The TechEdSat-15 project is managed by Ames and funded by the Ames Engineering Directorate. TechEdSat-15 partners include San Jose State University.

TechEdSat-15 was launched on the second Firefly-Alpha rocket and reached orbit, although lower than planned.