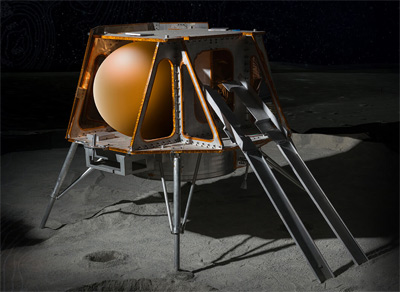 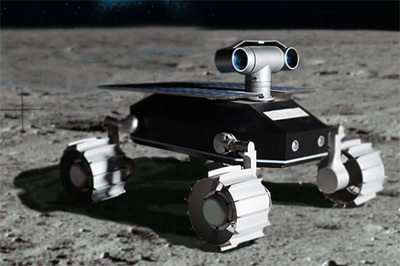 The Team Indus Lunar Lander is a lunar lander developed by the Indian nonprofit organisation Team Indus. It is an entry to win the Google Lunar XPRIZE (GLXP).

The Team Indus Lunar Lander is a lunar lander, which has a propulsion system to enable itself to leave earth orbit and to enter a trajectory to the moon. After landing it will deploy the Indian ECA (Ek Choti si Asha) rover, which will move to a distance of at least 500 m to satisfy the rules of the GLXP.

The propulsion system is bipropellant, consisting of a single 440 N prime thruster and sixteen 22 N thrusters.

Once deployed from the rocket, the spacecraft will orbit the earth twice. In a manoeuvre called the trans-lunar injection by which it will successfully leave Earths orbit, the rocket engines will be fired to set course to the Moon. At this point, the craft will be traveling at the maximum speed of 10.5 km/salmost 39600 km/h for the distance of 384400 km within 10 days. When roughly 100 km from the Moon, it will perform another manoeuvre called the Lunar Orbit Capture to eventually settle into a parking orbit. By now, the craft will have decelerated to 800 m/s. These extreme variations in speed will consume most of the spacecrafts fuel.

The landing phase of the mission will be initiated at a 100 km × 100 km orbit around the Moon. The entire process will be controlled by software onboard the spacecraft using data collected from laser sensors. These sensors will detect and analysis the surface, orienting the craft accordingly. Considering that manual control of the craft at this point is impossible, automation and preprogramming is the only way to go. At a time optimised to coincide with the lunar dawn on Mare Imbrium, the spacecraft thrusters will be fired again to decrease the orbit for a soft touchdown.

ECA or Ek Choti si Asha is one of the lightest models of rovers. Her body is matchbox-like and holds a battery, computer and communication equipment to connect with the spacecraft. She holds two high-definition space-grade cameras from the French space agency, CNES. Her wheels have been designed to ensure that fine Moondust does not damage the machinery, with three fish-eye cameras trained on them to monitor the movement. ECA will be lowered onto the surface, move for a minimum distance of 500 m, capture and beam back high definition videos and images to Earth through the spacecraft. One of the five ground stations on Earth (Goldstone, USA; Madrid, Spain; Byalalu, India; Baik, Indonesia; Canberra, Australia) will pick the signals up and relay them to the TeamIndus Mission Control Centre.

Also carried on board is a Japanese GXLP entry, the Team Hakuto rover.

Team Indus has a launch contract on a PSLV-XL rocket for late 2017, but the launch was delayed to early 2018.

By November 2017, Team Indus was still trying to raise $35 million  half the missions total cost  to cover its final development and launch costs. In January 2018, the launch contract was put off.

The Team Indus Design formed the base for the US company OrbitBeyond's Z-01 lunar lander, which won a contract by NASA's Commercial Lunar Payload Services (CLPS) program. OrbitBeyond canceled its contract in late July 2019.