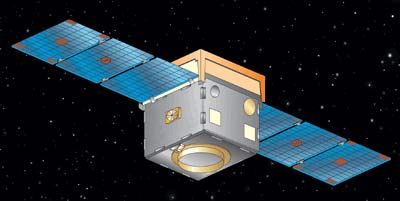 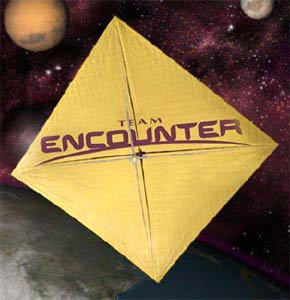 Team Encounter's Flight One spacecraft will demonstrate Solar Sail technology for the follow-on interstellar mission: Humanity's First Starship. Scheduled for launch in the 4th quarter of 2005, the Carrier spacecraft will remain in its initial orbit for up to 90 days executing secondary mission objectives. At the end of that time, the primary mission, a 20 m × 20 m solar sail, will be deployed.

Fabrication is getting under way on Flight One, the 2005 precursor to the solar escape mission. Flight One will test sail deployment, sailcraft structural integrity, and the functionality of the sailcraft attitude control system (ACS). After the tests, NOAA may use the sail to fly into a non-Keplerian pole sitter orbit.

Team Encounter's Carrier spacecraft is a derivative of the TechSat-21 architecture being produced by MicroSat Systems, Inc., Littleton, CO for the U.S. Air Force Research Lab. Solar Sail components are being designed, manufactured and tested by L'Garde, Inc., Tustin, CA. The Video Image Capture System is a derivative of the flight proven RocketCam product of Ecliptic Enterprises, Pasadena, CA.

NASA has awarded a $6.5 million contract to Team Encounter to fly a cutting edge navigational technology in space. Called the “Inertial Stellar Compass” (ISC), the device will fly on Team Encounter Flight One.

Developed by Draper Laboratory, the ISC is low-power, lightweight device that will allow a robotic spacecraft to precisely determine its position and direction in space and make necessary course corrections. The autonomous capabilities of the ISC are a technological 'first' that will revolutionize missions of the future and allows NASA to:

The ISC experiment has been moved to the TacSat 2 satellite.