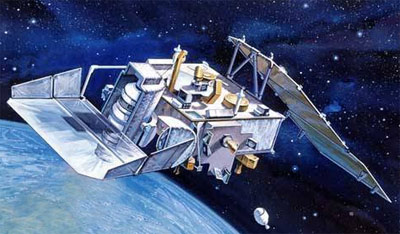 Teal Ruby was a technology experiment to test new IR sensors for early warning satellites. Originally named P80-1 (also P80-A) until December 1983 when it was renamed AFP-888 and its launch date became classified.

It has essentially a rectangular parallelepiped shape and approximate dimensions 2.4 × 2.4 × 0.7 m. The spacecraft is three-axis stabilized to maintain one 2.4 × 2.4 m surface vector pointing at the nadir. The spacecraft serves as a stable platform reference for three experiment telescopes. The spacecraft telemetry capability is PCM and it uses onboard tape recorders with up to 6 hours storage.

The Teal Ruby payload, also developed by Rockwell, consisted of a lightweight, large aperture telescope with an advanced cryogenic optical system that cooled it to 226° Celsius. The heart of the payload would be the largest mosaic focal plane ever built, consisting of high-performance monolithic infrared CCD-multiplexer arrays for transducing the infrared radiation into electric signals, detecting sources in the 216 micron band. The payload also included an on-board signal processor to eliminate most background clutter, assemble target impulses into tracks, and send only the pertinent data to the Space System Divisions Mission Operations Center in Seal Beach, California. The raw data would also be transmitted to the ground so that it could be separately processed later and compared to the onboard processing.

Three secondary payloads were also planned to be carried on the spacecraft:

When Teal Ruby was started in 1977 it was originally to be launched on the fourth or sixth Shuttle mission from Cape Canaveral with an two stage solid motor transfer stage in 1980, but it suffered from lengthy delays. It was later moved to the first Shuttle mission from Vandenberg. After the Challenger disaster it was put into storage. Later it was manifested for a 1990 launch from Cape Canaveral, but the project was finally cancelled in October 1988.

The satellite, still in storage, served as a laboratory for aging processes of space equipment. Later it was donated to the National Museum of the U.S. Air Force