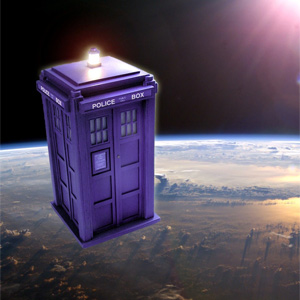 The TARDIS in Orbit was a planned memorial satellite originally planned to be launched to the 50th anniversary of the science fiction series "Doctor Who" in 2013.

The TARDIS in Orbit initiative by Robert and Alex Doyle is privately crowd-funded via Kickstarter, which raised over 80.000 USD for the launch.

The satellite is a simple expandable shell with the shape and proportions of the TARDIS. The satellite's exterior will be made from a metalized mylar film (BoPET) - over a collapsible, partial, wire frame. The BoPET surface will be sealed air tight - in its collapsed state so that the small amount of residual air inside the sealed mylar skin will cause the TARDIS to expand in the vacuum, and the partial frame will help it maintain its shape. Expanded, the satellite will be about 40 cm tall and will have the TARDIS' proportions. A small camera and a flashing light are on board, which are powered by solar cells in the window-areas of the TARDIS. The launch mass will be less than 0.5 kg.

The satellite is planned for a launch on the maiden IOS Neptune launch vehicle, which has been delayed multiple times over the years past the envisioned 2013 launch date, so the eventual launch date remains uncertain. It remains unclear, if it will ever launch. Additionally it became unclear, if the initiators of the project had been in fact started to build the satellite.