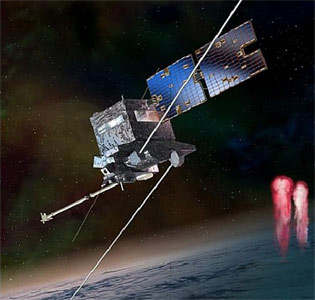 The general objective of the TARANIS mission is to study magnetosphere-ionosphere-atmosphere coupling via transient processes. At the beginning of the project proposal, the transient processes considered were essentially sprites and their associated phenomena, hence the name TARANIS (Tool for the Analysis of RAdiation from lightNIng and Sprites). Today, all transient optical phenomena observed at an altitude of between 20 and 100 km (blue jets, red sprites, halos, elves, etc.) are covered by the term TLEs (Transient Luminous Events).

Furthermore, the study's reach has been extended to incorporate the transient precipitations and accelerations of energy electrons, regardless of whether they are directly linked to TLEs. In view of the satellite's orbit, emphasis is placed on medium and low latitudes, which, by definition, have been the focus of very few studies in the past.

The payload includes numerous sensors to observe the TLEs and to perform in-situ measurements of perturbations caused on the local plasma (fields, waves and particles). The satellite uses a platform from the MYRIADE series. The upper side, which carries the payload, will be pointed towards Earth.

The payload includes the following elements:

It was launched from the Guiana Space Center in a shared launch by a Vega rocket into a quasi-sun-synchronous orbit at an altitude of 700 km in 2020, but failed to reach orbit due to an issue with the upper stage.