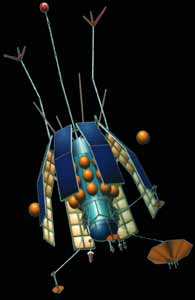 The Taifun-2 series of satellites released up to 24 subsatellites called Romb for radar and sensor calibration. The Romb satellites were used as simulations of warheads for calibration of ground based radars.

The Taifun-2 satellites were three-axis stabilized and based on the AUOS-3 bus. There were three subtypes (Taifun-2A, Taifun-2B and Taifun-2V), which each carried 24 subsatellites. The names of the subsatellites are not given, but the subsatellite separation systems are identified as SOT-A, SOT-B and SOT-V for the three subtypes respectively. The only difference between SOT-A and SOT-B was the ejection speed, while SOT-V was designed for "optical reflectors".