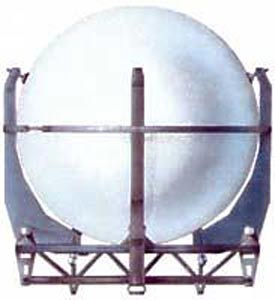 The Taifun-1B or Yug were passive radar calibration satellites employed by the USSR and later Russia.

They consisted of a 2 m diameter spherical with smooth surface and had a launch weight of about 500 kg. The Yug satellites were produced by Yuzhnoye and were launched by Kosmos-3M rockets employing a special launch cradle. Originally was also supposed to be based on the Taifun-1 platform, but that eventually another design was chosen.

One Yug satellite was launched on a development flight of the Zenit-2 rocket in 1986.