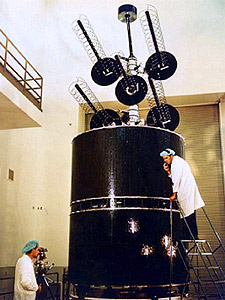 Two stories high and more than 2.8 meters in diameter, the huge satellite was used by the U.S. Army, Navy, and Air Force to test the feasibility of using synchronous satellites for tactical communications with mobile military field units, aircraft, and ships. TACSAT was taken out of service 16 December 1972, after demonstrating the advantages of this type of satellite communications system.

The first satellite to be spin-stabilized by the Hughes-developed Gyrostat, TACSAT carried three antenna systems: an array of five UHF helices, two microwave horns for X-band communications, and a biconical horn for telemetry and command. Tactical communications experiments in-orbit were conducted in two frequency bands: the standard military UHF band used for air-ground communications and the SHF portion of the X band set aside for military satellite communications.

Since the satellite's strong signals were picked up by all types of terminals, including those with antennas as small as 0.3 meter in diameter, remotely deployed field units communicated with their headquarters and each other through the satellite. The high RF power transmitted by the spacecraft permitted simultaneous access by many users.