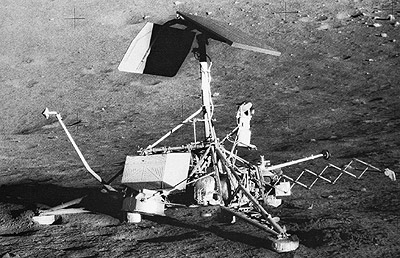 The Surveyor program consisted of seven uncrewed lunar missions that were launched between May 1966 and January 1968. Five of these spacecraft, Surveyor 1, 3, 5, 6, and 7 successfully soft-landed on the lunar surface. In addition to demonstrating the feasibility of lunar surface landings, the Surveyor missions obtained lunar and cislunar photographs and both scientific and technological information needed for the Apollo crewed landing program. Four spacecraft, Surveyor 1, 3, 5, and 6, returned data from selected mare sites from Apollo program support, and Surveyor 7 provided data from a contrasting rugged highland region.

Each spacecraft weighed 1000 kilograms at launch, was 3.3 meters high, and had a 4.5-meter diameter. The tripod structure of aluminum tubing provided mounting surfaces for scientific and engineering equipment. Onboard equipment consisted of a 3-meter-square solar panel that provided approximately 85 watt output, a main battery and 24-volt non-rechargeable battery that together yielded a 4090 watt total output, a planar array antenna, two omnidirectional antennas, and a radar altimeter. The spacecraft carried a Star-37 retro motor for breaking. After the Star-37 has burned out, it was separated and the Surveyor descended on its three hydrazine engines (Thiokol TD-339). The soft landing was achieved by the spacecraft free falling to the lunar surface after the engines were turned off at a 3.5-meter altitude to avoid contamination of the landing site. Operations began shortly after landing.

Four Surveyor spacecraft landed in the lunar maria near the equator. These sites were selected primarily because they were being considered for Apollo crewed lunar landings. Surveyor 7, the last in the series, landed in the highland region close to Tycho Crater, a site chosen primarily for its scientific interest. The suitability of each site for making a safe landing was also evaluated as part of the site selection process.

In addition to the objectives of developing and validating the technology for landing softly on the Moon and providing data on the compatibility of the Apollo spacecraft design with conditions on the lunar surface, the Surveyor program had the objective of adding to our scientific knowledge of the Moon. Toward that end, the following investigations were performed by the Surveyor spacecraft (note that not all investigations were carried out on every mission).