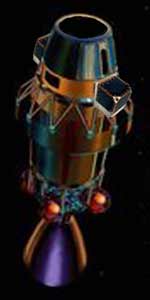 Surfsat 1 (Summer Undergraduate Research Fellowship Satellite 1), a student-built satellite, consists of two aluminum rectangles each about the size of a bread box. The JPL spacecraft, funded by NASA at a cost of $3M, was successfully launched 4 November 1995 on a Delta-7920-10 launch vehicle. Surfsat-1 went as a secondary payload on the Canadian Radarsat 1 satellite from Vandenberg Air Force Base in California.

The satellite was designed, built, and tested with the help of 60 undergraduate college students from the California Institute of Technology and 14 other universities. It consisted of two boxes covered with solar cells and fixed to the Delta second stage. The stage and Surfsat were gravity gradient stabilized and there were no batteries.

Surfsat-1 contains low power radio beacons and transponders, radiating over hemispherical antennas in three microwave bands, for testing new NASA ground tracking facilities. The spacecraft, which remains attached to the second stage of the launch vehicle, is designed to operate for at least one year.