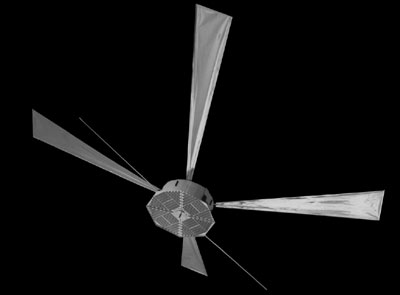 Sunblazer was a project to probe the solar corona by sending radio waves through the corona. The project was to determine the density of electrons, to determine the solar magnetic field by measuring the rotation of linearly polarized radio waves and to detect fluctuations using a coded signal, so that the time of flight of radio waves could be accurately measured. The probes were to be developed by NASA with the MIT (Massachusetts Institute of Technology) in the 1960ies.

The probes were to feature a simple 500 W peak power dual-frequency radio transmitter. The broadcast of this transmitter would allow the study of the solar magnetic field and the coronal electron density by measuring the rotation of the linearly polarized radio waves. Additional, a coded signal would allow to measure the exact time-of-flight of the radio waves.

No active thermal control was required. The attitude control was to be provided by four solar sails. Power was provided by solar cells, which provided 30 W at perihelion and 12 W at aphelion. During development, the probes mass rose from 4.5 kg to 18 kg while additional instruments were added. The Sunblazer probes were to enter a solar orbit with perihelion at 0.53 AU and period of 0.67 years, so that one year after launch it would be at perihelion and in solar conjunction.

The plan was to launch the first probe in 1968 from Wallops Island with a five-stage Scout-C launch vehicle. The second and third probe were to follow in 1969 an 1970, but the first launch slipped to 1971 and 1972 and finally project was cancelled before the first launch took place.