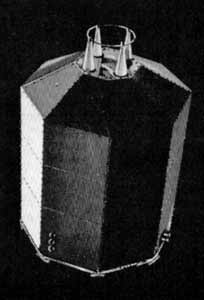 STV (Satellite Test Vehicle) was a series of vehicle evaluation payloads built for the test flights of the Europa-1 rocket.

The 214 kg octagonal prism shaped satellites were built by Fiat Aviazione for ELDO to register the launch environment of the Europa-1 rocket.

Three attempts were made to put a STV satellite into low orbit:

STV 1 was the first attempt to put a satellite into orbit by the Europa-1 rocket. This attempt failed, when the third stage of the launch vehicle exploded 0.5 seconds after ignition.

STV 2 was a repeat of the previous mission. Again the third stage failed after only 1.3 seconds.

On the launch of STV 3, all three stages of the launch vehicle worked correctly, but as the payload fairing failed to separate, the payload did not reach orbit.