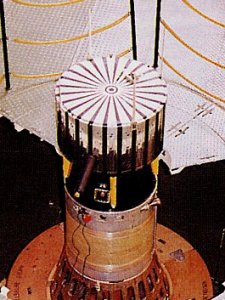 STV (Satellite Test Vehicle) was a series of vehicle evaluation payloads built for the test flights of the Europa-2 rocket.

STV 4 was a mass representative for the Symphonie communications satellites, which were to fly on the third and fourth flights of Europa-2. The 360 kg cylinder shaped satellites were built by Fiat Aviazione for ELDO to register the launch environment of the Europa-2 rocket.

The launch of STV 4 failed, when the inertial guidance system failed 105 seconds after launch, which lead to vehicle break up at 150 seconds.

A second vehicle, STV 5 was to fly on the second Europa-2 rocket, but was cancelled along with the whole Europa project.