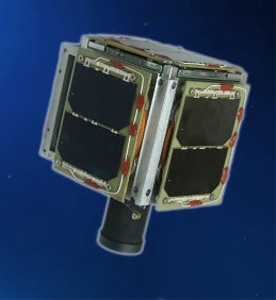 STUDSAT (Student Satellite) is a pico satellite conceptualized and currently being designed by undergraduate students across India. The mission is experimental in nature and the major objective is for the students to have a hands on experience on the design, fabrication and realization of a space mission at a minimum cost. The mission life is to be six months.

The uniqueness of this project is it has been initiated by students and managed mostly by students with support from Indian Space Research Organization and the Studsat consortium, which consists of seven Engineering colleges from Hyderabad and Bangalore, who formed as a team and signed an MOU among themselves in order to sponsor the project financially.

STUDSAT is built on a CubeSat 1U structure. The payload consists of a CMOS camera. The objective of this system is to obtain monochrome images of the Earth with resolution of 94 meters.