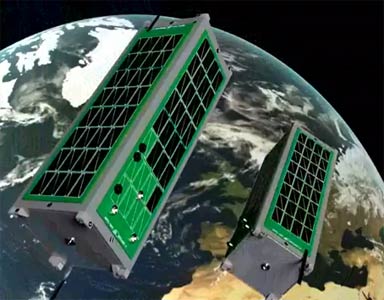 Space innovators at the University of Surrey and SSTL are developing STRaND 2 (Surrey Training Research and Nanosatellite Demonstrator 2), a twin-satellite mission to test a novel in-orbit docking system based on the XBOX Kinect technology.

Similar in design to STRaND-1, the identical twin satellites will each measure 30 cm (3-unit Cubesat) in length, and will utilise components from the XBOX Kinect games controller to scan the local area and provide the satellites with spatial awareness on all three axes - thus allowing them to dock.

The STRaND-2 twins will be separated after launch. After the initial phase of system checks, the two satellites will be commanded to perform the docking procedure and, when in close proximity, the Kinect-based docking system will provide the satellites with 3D spatial awareness to align and dock.