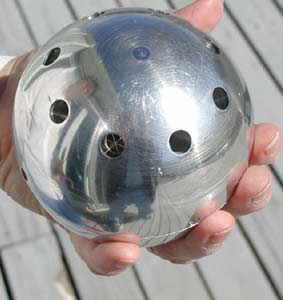 Starshine 5 (Student Tracked Atmospheric Research Satellite for Heuristic International Networking Equipment) was a small to be carried by Starshine 4 in its interior and was to be released into its own orbit about one minute after being deployed from Shuttle.

Comparison of the relative decay rates of the orbits of Starshine 4 and 5 was to allow to derive atmospheric densities more precisely than previously.

Starshine 5 was a 10 cm hollow aluminum sphere, which which carried 31 laser retroreflectors on its surface and was to be tracked by the International Satellite Laser Ranging Network (ISLR). It had no mirrors and was thus not to be naked-eye visible, in contrast to the other Starshine satellites.

With the Space Shuttle program having ended, no more flight opportunities for Starshine 4 and 5 are available anymore and the program was been cancelled. A flight on an early Orion CEV mission to the ISS was considered, but this opportunity also ceased to exist after the cancellation of the Constellation program.