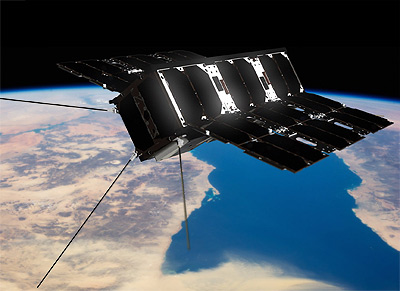 Starling was a 3U CubeSat constellation for tracking aviation and maritime traffic by Aerial & Maritime Ltd., with satellites built by GOMSpace.

A&Ms constellation was to focus on tracking aviation and maritime traffic between 37° north and south of the equator, roughly as far north as the Mediterranean Sea and Seoul, South Korea, and as far south as the bulk of South America and Auckland, New Zealand. The constellation was to consist of 80 to 100 satellites.

The constellation is designed to carry Automatic Dependent Surveillance-Broadcast (ADS-B) payloads for tracking planes, and Automatic Identification System (AIS) payloads for maritime vessels. They are based on technologies inherited from the GOMX 1 and GOMX 3 satellites.

The first eight satellites were to be launched in 2019 on an air-launched LauncherOne rocket into a low-inclination orbit, but were delayed.

Aerial & Maritime struggled to raise funds for constructing the constellation, exagerated by the COVID-19 pandemic in 2020. GomSpace announced on 16 June 2020 that Aerial & Maritime will be liquidated, and that GomSpace will retain ownership of the eight satellites, designed to track ships and airplanes from an equatorial low Earth orbit, none of which were launched. The satellites are either to be sold or repurposed.