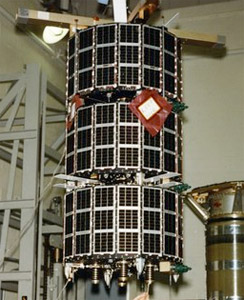 The satellites, based on DSI's Maestro bus, are gravity gradient stabilized. Body mounted solar arrays provide ~15 W orbit average power. Originally the mission was to consist of only two spacecraft and to be launched on a Scout-G1 booster. As all available Scout launchers in the inventory had already been assigned to other missions, an Atlas-E rocket became available. This rocket, which could not be used for any other msission due to a lower than normal thrust of one of its engines, was fitted with the Altair-3A (Star-20A) upper stage inherited from the original Scout launch vehicle. The resulting Atlas-E Altair-3A combination had a higher performance than the Scout, so that a third satellite could be added.

Six low cost ground stations were designed, built and located around the world to operate these spacecraft.

Also on board of this launch was an experimental Prototype Deployment Device (PDD).