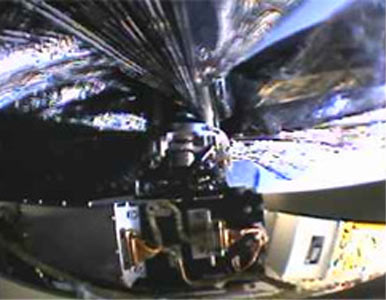 SSP (from onboard camera) [JAXA]

The SSSat (Solarsail Subpayload Satellite, soraseiru sabupeiro-do) was an experimental 15-meter diameter solar sail, based on the experience of the earlier S-310-34 suborbital mission. The solar sail experiment was mounted on the third stage of the M-5 launch vehicle instead of balast and was to deploy after the primary and piggy-back satellites were jettisoned.

It was launched in February 2007 and was deployed from the stage at 2146 UTC but opened only incompletely.

A reflight in September 2007 was successful.