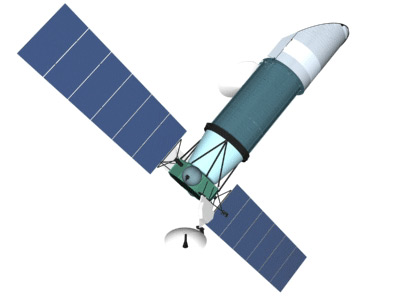 Originally the satellite was to be built on the Spektr bus, a derivative of the Prognoz-EW-Bus and to be launched on a Proton-K Blok-DM-2 booster, but budget problems have forced a redesign. Now it will be based on the smaller Navigator bus and will be launched on a Zenit-3F combination.

The main instrument is the T-170M 1.7-meter Ritchey-Chretien telescope, a lighter version of the originally planned T-170 telescope. It is equipped with three instruments:

The future of this project is uncertain. Originally a launch in May 2021 is planned. A switch to a Proton-M Blok-DM-03 launch vehicle is likely, as the Zenit-3F will be most probably phased out long before the planned launch date. It will be placed into a geosynchronous orbit with an inclination of 51.6°. In May 2019, a launch date in October 2025 was announced.