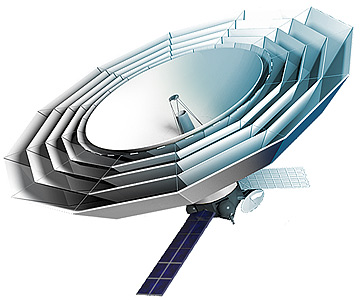 The Spektr-M (Millimetron) is a Russian observatory-class mission. It is a project of Astro Space Center of Lebedev Physical Institute , Russian Academy of Sciences (ASC LPI). It will be a 10-meter space telescope designed to study various objects in the Universe at millimeter and infrared wavelengths from 0.07 to 10 mm. The observatory has two operational modes: Space-Earth interferometer and the single-dish. The first mode will provide high angular resolution up to 10-8  10-9 arcseconds to study the structure of the most compact objects in the Universe  supermassive black holes. The second mode will have the best sensitivity to study the weakest sources of the Universe.

High sensitivity is achieved by deep cooling of the telescope mirror system and on-board scientific payload. While, high angular resolution is provided by the orbit configuration. The observatory will be located near the Lagrange point L2 at a distance of 1.5 million kilometers from Earth in the anti-solar direction.

Scientific program of Millimetron space observatory is aimed to solve a set of the most important and breakthrough scientific problems in the field of modern astrophysics and cosmology, namely detailed study of black hole shadows, search for wormholes, water trail in the Galaxy, CMB spectral distortions.