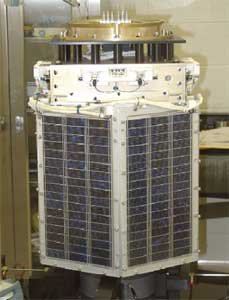 The SPASE (Small Payload Access to Space Experiment) was developed by AeroAstro as part of the NASA Marshall Space Flight Center (MSFC) Future-X program as a prototype for very small scientific satellites.

The Future X SPASE spacecraft kernel was to be launched as a STS HitchHiker payload while integrated into a "top opening" Hitchhiker canister.

The spacecraft is fully assembled and integrated with the payload, waiting for a Shuttle Hitchhiker launch opportunity. In late 2003, it was cancelled.