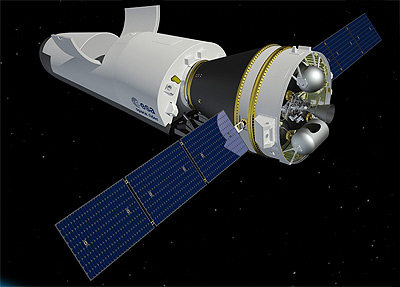 Space Rider is a reusable lifting-body orbital and re-entry experiment, which aims to provide Europe with an affordable, independent, reusable end-to-end integrated space transportation system for routine access and return from low orbit. It will be used to transport payloads for an array of applications, orbit altitudes and inclinations.

Space Rider is a lifting reentry body, with its shape resulting from the set of design IXV experiment. The Vega-C's AVUM+ serves as the propulsion module for Space Rider and stays attached during the mission. It carries deployable solar arrays. The payload mass will be larger than 450 kg and payload volume larger than 0.8. The in Orbit operational phase mission duration will be longer than 2 months.

The spacecraft will be launched from Europes Spaceport in Kourou, French Guiana, stay in orbit as required by its payloads, and then perform a ground landing. Afterwards, it will be refurbished and equipped with new payloads for the next flight.

Space Rider will have the potential to allow:

The System Requirements Review is planned for 2017. The Preliminary Design Review, to be completed in 2018, will lead to the Detailed Design phase, with the Critical Design Review in 2019.

The reference mission plans a Vega-C launch from Kourou (French Guiana) in 2020 into a orbit similar like the ISS.