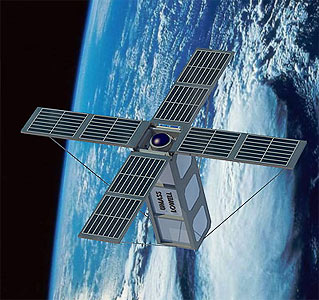 The SPACE-HAUC (Science Program Around Communication Engineering with High Achieving Undergraduate Cadres Project) is a 3U CubeSat educational mission intended primarily as a hands-on student training mission that will also demonstrate X-band beam steering from a CubeSat platform.

The payload consists of a software defined radio. The goal is to demonstrate the practicality of communicating at high data rates in the X band using a phased array of patch antennas on a CubeSat. The antennas will operate at frequencies of 8.0 to 8.4 GHz from an orbit of about 450 km.

The telemetry will be implemented by using a software-controlled radio to create an intermediate frequency (IF) modulated signal. The IF will be mixed with a local oscillator and amplified to produce the broadcast signal. Filters will be used to ensure that the out-of-band signal stays below the levels required by our broadcast license.

It was selected in 2017 by NASA's CubeSat Launch Initiative (CSLI) to be launched as part of the ELaNa program. It was launched in August 2021 onboard of Dragon CRS-23 to the ISS, where it was deployed on 12 October 2021.