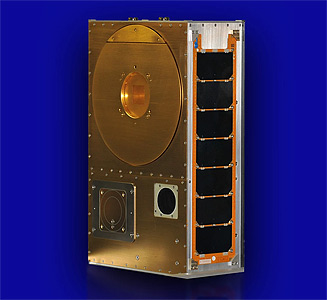 The SORTIE (Scintillation Observations and Response of The Ionosphere to Electrodynamics) nanosatellite mission will investigate the underlying causes behind the appearance of plasma structures in the F-region of Earths ionosphere, leading to equatorial plasma bubbles, and the evolution of these structures after formation.

The SORTIE mission is led by ASTRA LLC (Atmospheric & Space Technology Research Associates). The team is composed of ASTRA, COSMIAC, AFRL, University of Texas at Dallas and Boston College. COSMIAC will be the satellite integrator.

The mission is to collect data over the course of 6 months, which will allow scientists to describe the distribution of wave-like structures in the plasma density of the ionospheric F-region and to connect these variations to wave sources in the troposphere and in the high latitude thermosphere.

The spacecraft is built to the 6U CubeSat form factor and will carry two instruments for determining the structure of equatorial plasma: a miniature Ion Velocity Meter (mini-IVM) built by The University of Texas at Dallas, and a micro Planar Langmuir Probe (µPLP) built by the Air Force Research Laboratory in Albuquerque.