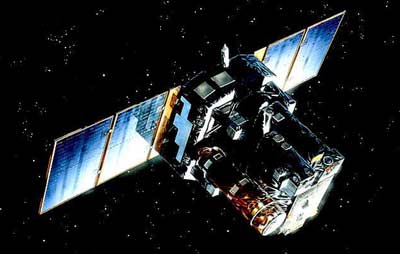 The SOHO (Solar and Heliospheric Observatory) is a joint ESA-NASA solar observatory.

The SOHO spacecraft is a three-axis stabilized platform crammed with instruments pointing continuously at the Sun. SOHO moves around the Sun in step with the Earth, by slowly orbiting around Lagrange Point No. 1, where the combined gravity of the Earth and Sun keep SOHO in an orbit locked to Earth-Sun line.

Built for ESA by Europe's aerospace industry, SOHO is a project of international cooperation between ESA and NASA. Of the spacecraft's 12 sets of instruments, nine come from multinational teams led by European scientists, and three from US-led teams. More than 500 scientists in 20 countries are directly involved in SOHO's instruments and research programmes. NASA launched SOHO and is responsible for communications and daily operations.

SOHO is part of the first Cornerstone project in ESA's science programme, in which the other part is the Cluster mission. Both are joint ESA-NASA projects in which ESA is the senior partner. SOHO and Cluster are also contributions to the International Solar-Terrestrial Physics Programme, to which ESA, NASA and the space agencies of Japan, Russia, Sweden and Denmark all contribute satellites monitoring the Sun and solar effects.

SOHO's science ranges from the Sun's hot interior, through its visible surface and stormy atmosphere, and out to distant regions where the wind from the Sun battles with a breeze of atoms coming from among the stars. Discoveries include complex currents of gas flowing beneath the visible surface, and rapid changes in the pattern of magnetic fields. In the atmosphere SOHO sees non-stop explosions and also remarkable shock waves and tornadoes.

After it went into space in 1995, SOHO was meant to operate until 1998, but it was so successful that ESA and NASA decided to prolong its life until 2003. This extension enables SOHO's scientists to compare the Sun's behaviour when it had few dark sunspots (1996) with the peak of sunspot activity around 2000. SOHO disappeared for several weeks in 1998, but it was recovered and brought back into operation after a gap of more than four months. Other difficulties came with the loss of the gyroscopes used to control the spacecraft's orientation, Despite these problems, engineers have kept SOHO functioning with all its instruments performing well.