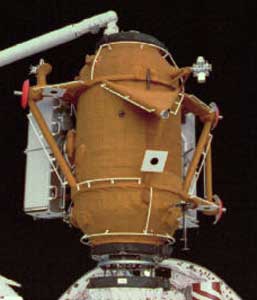 Originally it was built to support Buran operations with the Mir, but it was finally put into service, when in 1994 Russia and the US signed an agreement calling for seven Shuttle missions to Mir until 1998. The SO also included its own thermal control, telemetry and TV-transmission system.

In November 1995, the Space Shuttle Atlantis delivered the Docking Compartment to Mir during STS-74 mission. The module was initially raised from their cargo bay and mounted on top of the Shuttle docking port. On November 15, Atlantis docked to Mir via docking compartment. Additionally, two new solar panels, to be later transferred and deployed on pre-built positions onboard Kvant-1 module were also delivered with SO. The solar arrays on one of the panels were supplied by NASA.