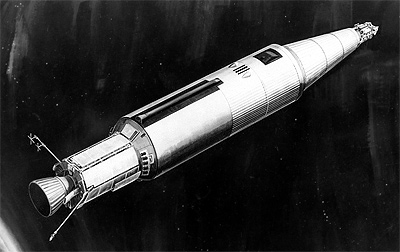 The Snapshot (Space Nuclear Auxiliary Power Shot) satellite was launched on April 3, 1965 a SNAP 10A nuclear power system into a 1300 km orbit with a cesium ion engine as a secondary payload.

The ion beam power supply was operated at 4500 V and 80 mA to produce a thrust of about 8.5 mN. The neutralizer was a barium-oxide-coated wire filament. The ion engine was to be operated off batteries for about one hour, and then the batteries were to be charged for approximately 15 hours using 0.1 kW of the nominal 0.5 kW SNAP system as the power supply.

The SNAP power system operated successfully for about 43 days, but the ion engine operated for a period of less than 1 hour before being commanded off permanently. Analysis of flight data indicated a significant number of high-voltage breakdowns, and this apparently caused sufficient EMI to induce false horizon sensor signals leading to severe attitude perturbations of the spacecraft. Ground tests indicated that the engine arcing produced conducted and radiated EMI significantly above design levels. It was concluded that low frequency, < 1 MHz, conducted EMI caused the slewing of the spacecraft.

A simulated SNAP-10A reactor was tested through destructive reentry during the RFD 1 suborbital mission.