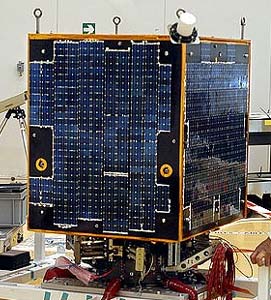 The Sloshsat-FLEVO (Sloshsat Facility for Liquid Experimentation and Verification in Orbit) is a satellite to investigate the behavior of liquids in weightlessness. The payload of the satellite consists of an experiment tank with elaborate instrumentation. The tank shape is a circular cylinder with hemispherical ends and no internal structures. The volume of the tank is 87 liters. The tank will be partially filled with 33.5 liters of water. With a sensor system, the liquid height at the tank wall will be measured at 270 locations. Additional sensors are provided at a few locations to measure liquid height with a better resolution, liquid velocity at the wall, pressures and temperatures. The mass of the dry satellite is approximately 70 kg. The fluid/rigid mass ratio is about 0.5.

The objectives of the Sloshsat-FLEVO experiment are to:

Sloshsat-FLEVO was to be launched on a Shuttle, as it was to use the Shuttle as a data relay. Only a non ISS flight was acceptable due to security reasons. But as no Shuttle flight opportunities were available due to the Columbia disaster, it has been modified for direct data transmission to enable launch on an Ariane-5ECA qualification flight. It will be released from top of the MaqSat B2 dummy payload.