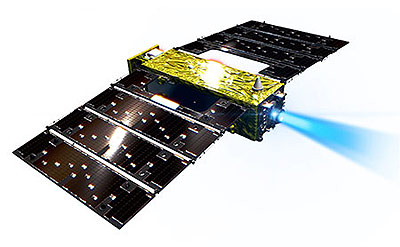 SLATS (Super Low Altitude Test Satellite) is an engineering test satellite currently under development in JAXA in an attempt to develop techniques to operate an satellite in extremely low earth orbits. In the presence of aerodynamic forces acting on the satellite, the altitude and attitude of the satellite are maintained by ion engines so that the aerodynamic drag can be cancelled.

For a super low altitude satellite, only low-thust thrusters are needed, although atmospheric resistance increases. A long-life and high-fuel efficiency thruster is required. An ion engine is the most appropriate type of space engine, when considering these conditions. From the perspective of exerting the greatest possible thrust, the propellant used in the SLATS ion engine is Xenon gas, which is the same propellant that was used in Hayabusa. Furthermore, SLATS uses technology developed for ETS 8, which realizes greater thrust than Hayabusa.

Tsubame's three onboard mission instruments are:

The satellite was be launched piggy-back on the GCOM-C mission and descended to its operational height of about 220 km by using atmospheric drag and the onboard gas jet. The ensuing orbit keeping operation executes the descent in five stages, 271.5 km, 250 km, 240 km, 230 km, and 220 km. Each altitude is sustained for some time. In an orbit at 180 km, the target altitude, where there is significant atmospheric resistance, the gas jet is turned on in addition to the ion engines to withstand the drag.