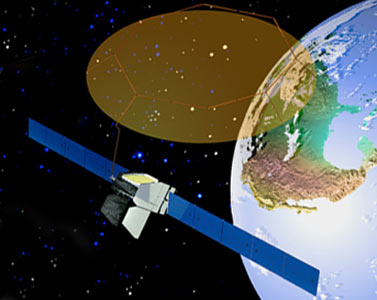 Under this contract, three Boeing built BSS-702GEM (Geomobile) satellites will enable the world's first commercial mobile satellite service using both space and terrestrial elements. The network, based on MSV's patented Ancillary Terrestrial Component (ATC) technology, combines the best of satellite and cellular technology. It will deliver reliable, advanced and widespread voice and data coverage throughout North and South America.

The satellites will use MSV's ATC technology to deliver service to wireless devices that are virtually identical to cell phone handsets in terms of aesthetics, cost, and functionality. Boeing will also develop ground-based systems that will provide advanced beam forming flexibility and interference cancellation unprecedented in commercial satellite systems. These technological advances will allow MSV optimal deployment of its ATC technology and spectrum utilization.

MSV-1 and MSV-2 satellites will cover Canada, the United States, including Alaska, Hawaii, Puerto Rico, the Virgin Islands, Mexico and the Caribbean Basin. They will replace the MSAT 1 and 2 satellites. The third satellite, MSV-SA will introduce MSV's advanced communications services into South America. The satellites are scheduled to launch in 2010 and 2011.

Boeing builds upon proven technology from predecessor satellites and a quarter-century heritage of integrating and deploying L-band systems. The satellites will be among the largest and most powerful ever built. Each spacecraft will supply 11,000 watts of power through 5-panel solar array wings using highly efficient triple-junction Gallium arsenide cells. The 22 meter L-band reflector for mobile terminal links will complement a 1.5 meter Ku-band antenna.

MSV announced, that to speed up construction of the two north american satellite, the MSV-SA satellite has been deferred to the third position. Later it was cancelled.

SkyTerra 1 was launched on 14.11.2010, but the full deployment of the dish antenna initially failed. But finally after several attempts, the reflector was fully deployed. In March 2012, the satellite was knocked out by a strong solar flare, but was recovered.

After Lightsquared's bankrupcy, SkyTerra 2's Boeing 702HP platform geo-mobile version is being modified so it can be repurposed for a 2014 launch for Boeing's MEXSAT contract placed by Secretaria de Comunicaciones y Transportes (SCT) in 2010 and amended in December 2012.

After emerging from bankruptcy and settling interference disputes with three GPS vendors, LightSquared is rebranding as Ligado Networks.