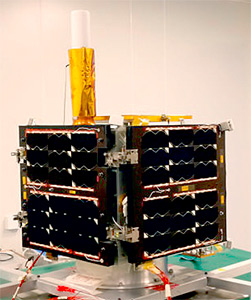 SindhuNetra, also known as RSAT, is an Indian technology demonstration satellite funded by the Defence Research Development Organisations (DRDO) research centre Imarat, Hyderabad, and built by PES University to track the operations of military and merchant navy ships in the Indian Ocean Region.

The SindhuNetra (Eye of the Sea) satellite and its satellite bus, that supports the payload and handles its data, was designed and developed by a team of faculty members and students at PES University. The payload is an Automatic Identification System (AIS) receiver.

The Sindhu Netra satellite has been developed by the young scientists of the DRDO and is capable of automatically identifying the warships and merchant ships operating in the IOR. The satellite, if required, can also help in carrying out surveillance in specific areas such as the South China Sea or the pirate-infested areas near the Gulf of Aden and the African coast.