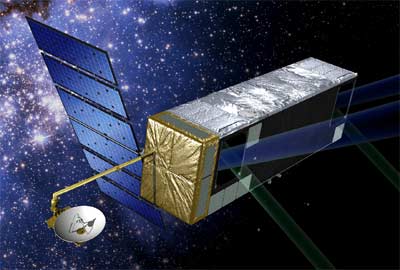 SIM (Space Interferometry Mission) will be an optical interferometer operating in an Earth-trailing solar orbit. In its final orbit the spacecraft will slowly drift away from the Earth at a rate of approximately 0.1 AU per year, reaching a maximum communication distance of about 95 million kilometers after 5.5 years. In this orbit the spacecraft will receive continuous solar illumination, avoiding the occultations which would occur in an Earth orbit.

Following orbit insertion, the solar array and high gain antenna will be fully deployed. Spacecraft systems will be checked out and tracking data collected to precisely determine the actual orbit achieved. After a period of several days to allow dispersion of any contaminants, final instrument deployments will take place. Check-out and calibration of the interferometer will then commence and continue for several months. From the end of this calibration period through the year 2011, the SIM interferometer will perform nearly continuous science observations over the entire celestial sphere.

Pointing of the spacecraft will be performed using reaction wheels, with small thrusters used to desaturate the reaction wheels. Pointing will be performed such that the nominal viewing axis never be within 45 degrees of the Sun to protect the viewing optics from heating. The spacecraft's velocity will need to be determined to an accuracy of 20 mm/sec or better in order to correct for relativistic stellar aberration. This will be achieved using ranging and doppler data obtained by 34 m Deep Space Network (DNS) ground stations. Nominally, observation sequence specifications will be uplinked every week or two. Observation data will be stored onboard, and returned to Earth several times each week. Special "quick turnaround" procedures will be used to handle "targets of opportunity."