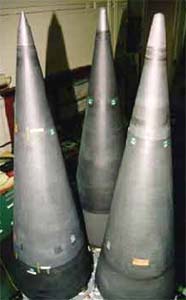 The test objectives of the May 1997 SHARP-B1 flight will be to demonstrate the non-ablating performance of the 3D UHTC "sharp" nosetip by performing a ballistic entry through the aerothermal performance constraint, and to correlate ground based sensors with flight sensors to characterize the material performance.

SHARP-B2, a follow-on flight test to SHARP-B1 successfully flown in 1997, demonstrated the performance of 1-mm radius Ultra-High Temperature Ceramic (UHTC) leading edges at Mach numbers greater than 22 and altitudes greater than 43 km. Four UHTC leading edge strakes were flown on a modified USAF Mk12 reentry vehicle. The launch vehicle was a Minuteman III. A successful mission was flown 28 September 2000. SHARP-B2 impacted the Kwajalein lagoon at the designated target point and was recovered October 1.