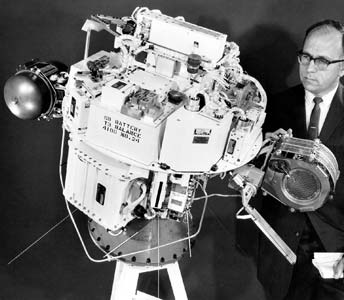 SERT 1 (Space Electric Propulsion Test) was a suborbital test flight of ion engines built by NASA's Lewis Research Center. SERT 1 was launched on 20.07.1964 on a Scout-X4 rocket from Wallops Island.

This flight experiment had a 8-cm-diameter cesium contact ion engine and a 10-cm-diameter mercury electron bombardment ion engine and was the first successful flight test of ion propulsion. The cesium engine was designed to operate at 0.6 kW and provide 5.6 mN of thrust and a specific impulse of 8050 s. The cesium flow was controlled by a boiler and the porous tungsten ionizer electrode. The mercury ion engine provided flow control via a boiler and a porous stainless steel plug. A hot tantalum wire was used as the discharge cathode. Beam and accelerator power supply voltages were 2500 V and 2000 V, respectively. The engine had a 1.4 kW power level with 28 mN of thrust at a specific impulse of about 4900 s. Each of the ion engines had a heated tantalum filament neutralizer.

The early part of the flight was dedicated to attempts to operate the cesium engine. The cesium engine could not be started because of a high-voltage electrical short circuit. The mercury engine was started about 14 minutes into the flight. The IPS was successfully operated for 31 minutes with 53 high-voltage recycle events which were handled by the PPU fault protection system. Each of the recycle events was only a few seconds duration. Major results from the test were the first demonstration of an IPS in space, effective ion beam neutralization, no EMI effects on other spacecraft systems, and effective recovery from HV electrical breakdowns. Thrust was measured or calculated using three independent measuring methods. In-space thrust, determined by both accelerometer and sun sensor data, agreed with the calculated thrust within 5%. The thrust was calculated from the beam current, beam voltage, doubly-charged ion correction, and the beam-divergence correction.