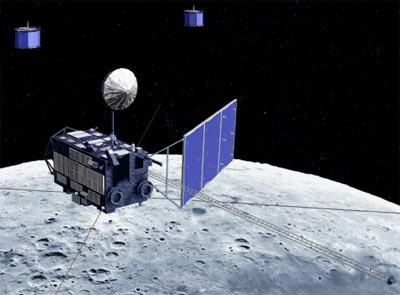 SELENE (Selenological & Engineering Explorer) will carry 13 instruments including imagers, a radar sounder, laser altimeter, X-ray fluorescence spectrometer and gamma-ray spectrometer to study the origin, evolution, and tectonics of the Moon from orbit. The 2000 kg launch-mass spacecraft will be carried by an H-2A rocket from the Tanegashima Space Center. The spacecraft consists of three separate units: the main orbiter, a small relay satellite (RSat), and a small VLBI (Very Long Baseline Interferometry) satellite (VRAD). The orbiter is a rectangular box carrying the scientific instrumentation, measures about 2.1 m by 4.2 m, and has a mass of roughly 1600 kg. The relay satellite is an octagonal prism and will be used to transmit communications from the orbiter to Earth. The VLBI satellite is the same shape as the relay satellite and will be used to conduct precise investigations on the position and precession of the Moon.

SELENE was launched into a 281 km × 232805 km × 29.9° earth orbit, from which it will inject itself into a lunar-transfer orbit, which will take 5 days to reach the Moon, where it will be put into an initial 120 × 13000 km orbit at an inclination of 95 degrees. The relay satellite will be released into a 100 × 2400 km orbit and then the VLBI satellite will be released into a 100 × 800 km orbit. The orbiter will then be lowered to its nominal 100 km circular orbit. Selene will carry out observations for approximately one year.

Following instruments are onboard:

After a successful mission, the orbiter impacted the moon on 10. June 2009.