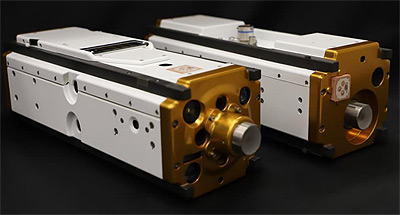 Seeker is an ultra-low cost approach to highly automated extravehicular inspection of crewed or uncrewed spacecraft that has been designed and built in-house at the NASA Johnson Space Center (JSC) based on a 3U-CubeSat form factor.

The first version of Seeker is intended to be an incremental development towards an advanced inspection capability. This effort builds on past free-flying inspector development efforts such as the AERCam Sprint and Mini AERCam.

Seeker was funded as an International Space Station (ISS) X-by Project, which required delivery of the vehicle approximately one year after authority to proceed and within the budget of $1.8 million. Seeker will fly onboard the Cygnus CRS-11 (NG-11) mission in 2019 and will deploy after Cygnus primary mission is completed.

The mission consists of the Seeker free flyer and the Kenobi supporting communication relay unit, which remains attached to Cygnus. Both are bult on similar 3U-CubeSat structures.

Seeker features a proulsion system using cold, gaseous nitrogen and twelve 0.1N thrusters to provide control authority in all six DOF. The system was designed entirely in-house at JSC and is comprised of COTS fluid components, custom machined manifolds, and custom additively manufactured thrusters. The propulsion subsystem is advertised to provide approximately 5m/s delta-V to a 5.7 5kg vehicle with the subsystem itself packed within an approximately 1.25U form factor.