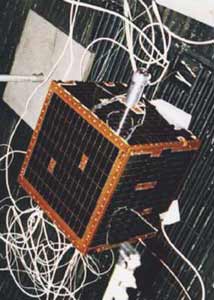 SEDSat 1 (Students for the Exploration & Development of Space - Satellite) is an american microsatellite. It was to obtain images of the Earth and distribute them through the Internet from the University of Alabama in Huntsville. It also served as a relay for amateur radio communications.

SEDSat 1 was launched as a piggy back payload mounted on stage 2 of a three stage Delta-7326 launch vehicle, which sent the Deep Space 1 (DS 1) space probe into a solar orbit. SEDSat 1 suffered from problems in the power system, causing both the imaging payloads and the amateur radio transponders never becoming operational. Only some telemetry was received. It was designed with a lifetime of five years, but was still semi operational in 2013.