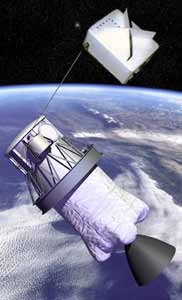 SEDS (Small Expendable Deployer System) were two piggy back missions of tether-in-space technology demonstrations. They deployed end-masses from Delta-7925 second stages after the primary deployment mission of the was conducted.

SEDS-1 was launched from Cape Canaveral Air Force Station as a secondary payload on the GPS-2A 10 launch on 30 March 1993. An hour after launch a spring loaded Marman clamp ejected a 26 kg payload downward at 1.6 m/s. This impulse was sufficient to allow deployment of enough tether for gravity gradient effects to take over and guarantee the remainder of deployment. Once into this regime, the tether paid off the end of a fixed spool inside the deployer at an increasing rate. Passive effects caused a smooth rise in tension as the tether unwound faster and faster from a shrinking package. Finally, when 1 km of tether remained, active braking was applied by wrapping the tether around the "barber pole" brake. This increases the tension by 10% for each 30° of wrap. The braking was open-loop, which reduced the deployment rate by only 50%. This resulted in a series of gentle "bungee" bouncees at the end of deployment. The tether swung to the vertical and was cut 1 orbit after the start of deployment. This slung the payload and tether from Guam onto a reentry trajectory off the coast of Mexico. Pre-flight simulations had indicated that bouncing would have little effect on the reentry location, and the reentry was accurate enough that a pre-positioned observer was able to videotape the payload re-entry and burnup. The last data collected from the payload before reentry showed a predicted tension rise as drag began to blow the tether back and turn it into a kite tail.

SEDS-2 was launched on the GPS-2A 15 launch on March 9, 1994. SEDS-2 used feedback braking starting early in deployment. This limited the residual swing after deployment to 4°. Mission success was defined as deployment of at least 18 km, plus a residual swing angle <15°. The payload returned data for 10 hours until its battery died; during this time tether torques spun it up to 4 rpm. The 19.7 km tether was left attached to the Delta to determine long-term tether stability and micrometeoroid risks. The tether suffered a cut 3.7 days after deployment. The payload end reentered within hours, but the 7.2 km length at the Delta end survived with no apparent further cuts until re-entry on 7 May 1994. Surprisingly, the tether was an easy naked eye object when front lit by the sun and viewed against a dark sky. Intensified videos were made of 20 + passes over a 7 week period; all showed the tether stabilized near the vertical, even after the cut when tension was <4 grams.