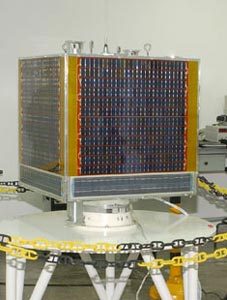 The SATEC (Satélite Tecnológico) was planned to test the technological equipment embarked in the VLS-1 launch vehicle. It was to have a useful life of six months. SATEC's mass was 65 kg, a box with a width and depth of 66 cm and a height of 61 cm.

SATEC was to orbit in a 750 km orbit with 15° to test four technological systems on board:

The structure, the battery, the PCU and S-Band transmitter had been developed internally in the INPE; the solar panels and the GPS have been developed in partnership with national companies.

SATEC was destroyed in pre-launch explosion of the VLS-1 booster a few days before the planned launch.