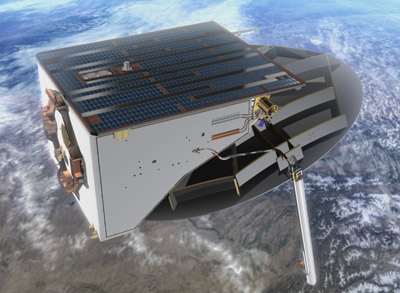 The SAR-Lupe radar reconnaissance spacecraft - the first german military satellites - feature a synthetic apperure radar (SAR), which has a spatial resolution of less than 1 meter. Due to the intelligent combination of existing technologies, SAR-Lupe operates independently of weather conditions on a 7/24 basis. It delivers up-to-date and highly detailed images from virtually all regions of the world. Data os transmitted by a X-band transmitter and encrypted S-band ise used for telemetry and command transmissions both direct to ground stations or via SAR-Lupe intersatellite links.

The system consists of a constellation of five identical satellites in three orbital planes, which was built at a cost of +250 million Euro.

The launch of the first of five satellites was planned for the beginning of 2005 with a Russian Kosmos-3M boosters with modified fairings to accomodate the large antenna, but the launch was delayed to end 2006. The overall system was completed in 2008 to deliver radar images for the German Armed Forces for at least ten years.